Three steps to make money in the junior mining market 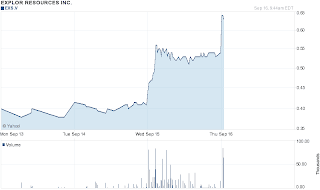 Step One: Watch as Greg McCoach pumps the latest drill result at Explor Resources (EXS.v) to his flock of mouthbreathers.
Step Two: Wait until all the mouthbreathers are safely on board.

EXS.v came out with a drill intercept yesterday that at first glance passes muster, what with 11.15m of 5.38g/t gold to put in the headline. It’s enough for the very silly McCoach to rouse his rabble with, that’s for sure. But what he’s probably not pointing out in his urgent updates to clients (his service costs $2,000 a year) is that it’s a confirmation drill hole at the same property that was drilled and announced in September 2009. Check how EXS.v ramped on the original pump promo campaign from the publication of those drill numbers and see what it finally did when the truth of the very same “Timmins Porcupine West” property came to light in March this year. 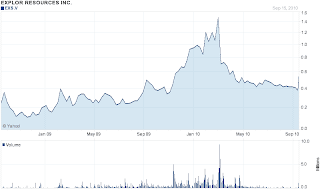 The intercept also came nearly 700m underground, which may cause a minor technical issue or two at the moment of attempting to mine the stuff at a profit. But the fact that this Porcupine West asset has clearly failed to show enough to be considered a live prospect will never stop a bullshit scamster like McCoach. LOOK AT THE DRILL NUMBERS! ELEVEN METRES OF GOOOOOLD!!!
And yes, this is the very same Greg McCoach and the very same pump we featured in this post on IKN, dated June 16th.  DYODD.