Today and for the first time, Peru’s Ministry of Energy and Mining has made public the review process it went through in 2014 that gave the Southern Copper (SCCO) Tia Maria project the environmental green light. You can find it on this link here and the interesting bit is the green link which goes to the 2014 EIA document PDF. At a guess, less than a dozen of you marvellous and wonderful IKN readers will be interested in that link. That’s enough to stick it here, so join me in a little bedtime reading material.
As for the regionwide strike action and protest today, it was mostly peaceful but this afternoon we’ve had reports of a skirmish between anti-mine protesters and police units near the town of Cocachacra in the Tambo Valley. Also one further up the main Panamericana Highway. Together, those have accounted for two arrests and two injuries.

UPDATE: From the document: This is wonderful, a case example of how an Environmental Permit is awarded by a government bureau: 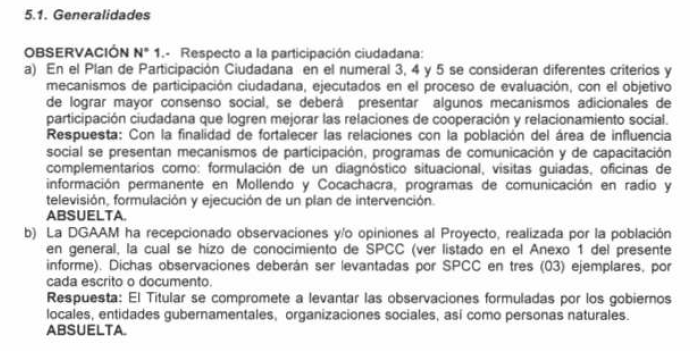 If you read Spanish you’ll need no prompting, but basically: “We weren’t sure whether to award the permit because we’d heard things weren’t great between SCCO and the locals, even though they’d already done some workshops and things. So we asked SCCO to do some more. So SCCO did some workshops and now everyone in the area knows what’s going on. Therefore this problem is solved. No problems.”