To be clear on Continental Gold (CNL.to) 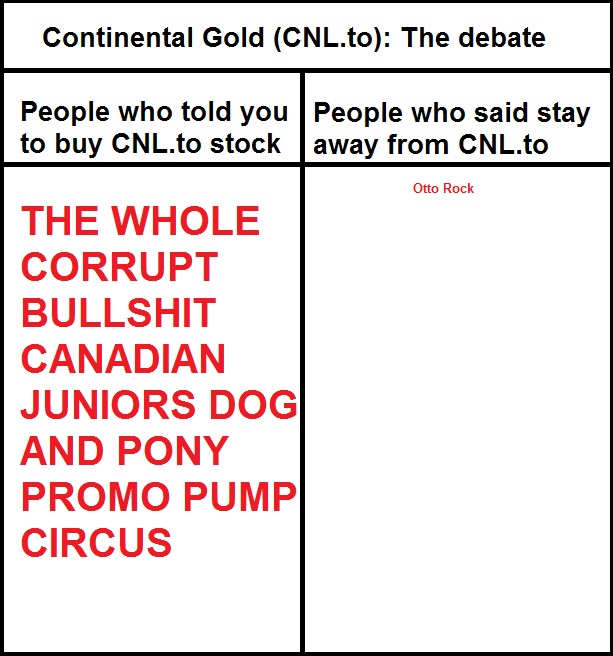 On May 24th Continental Gold (CNL.to) put in one of its zoom moves and that evening I wrote this post, “The Loneliness of the Long Distance Runner”. Here’s most of the words from that post and some of them highlighted for your consideration today:

It’s much easier to be part of the herd. And frankly, it was zero surprise to see CNL pop the way it did today because the whole and considerable weight of the Canadian bullshit peddling sellside mining industry is now behind this stock and its Buritica project. My stars those guys need a win and they’ve latched onto this one in no uncertain terms. When that happens, the outsider voice such as your humble scribe’s will always, but always be fully trampled upon in the rush. And that’s okay, it’s part of the lonely territory covered at IKN.

But be there 3m 4.6m or 10m ounces of supposedly and apparently economic high grading gold at Buritica, your author’s opinion of this stock changes not one iota. The people running CNL.to are not suspected of being untrustworthy or perhaps guilty of ripping off the world and getting rich by peddling bullshit, they’re stone cold certain rip-off merchants and proven mining scum. Feel free to put your money with them, but when you do be 100% crystal clear that by doing so you’re not the solution to anything, you’re just prolonging the deep problems in the Canadian mining industry. And when Buritica’s political and community risk suddenly goes off scale and the whole project blows up in everyone’s face, don’t remember this post. Nobody else will either, which is why scumbags like Sussman and Wall get away with what they do.

So I say the same thing tonight with the stock at $3.20 as I did when the stock was at $9, $10, $6 and most recently $2. Avoid Continental Gold, don’t go long, don’t go short, don’t go near. Better to invest in juniors that aren’t run by the lowest form of human life.