In just under 15 minutes time the biggest match of the year kicks off in Rome with Barcelona taking on Manchester United in the Champion’s League final. I, along with 80% of the continent, will be cheering on Barsa and hoping Lionel Messi shows that Portuguese git exactly who da man.

Candente (DNT.to) up 15% at C$0.42 and also doing great business on the Lima exchange. The time is nigh for the spinoff.

Vena Resources (VEM.to) down a penny at $0.32 in Canada but also going great guns in Lima with 168,000 shares traded. When this thing suddenly pops 20% or 30% I’ll be the one with the smartalec grin on his face going “toldya so toldya so”.

Guyana Gold up 1.5% at $3.85 and the beat goes on. This thing has been unstoppable in the last couple of weeks. Templeton happy. Sprott happy. Otto happy.

Rocmec (RMI.v) up 14.3% at 8c. I’ve mentioned this microdot stock on the blog a few times and it’s still on my radar. It’s been bouncing around in the 7c to 9c range in the last few weeks but I note some interesting insider buying activity recently, with headhoncho Brisebois buying into the company’s own financing placement to the tune of 100,000 units. Not the worst place for some über-risk capital that’s for sure, but I couldn’t personally get comfy and buy until I know more about this thermal fragmentation technology thingy. It’s intruiging and if they ever give me the chance I’d like to check it out in situ. Waddya say, Stella?

UPDATE: Half-time, Barcelona 1, Man Utd 0 and things going well so far. Here’s a great shot of Messi in full flow during the first half. 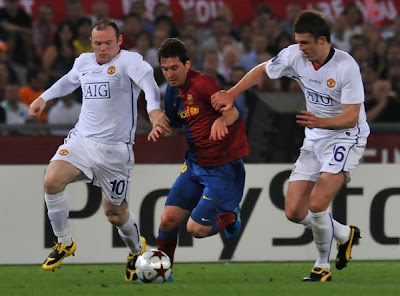 UPDATE 2: And this is Messi about two seconds after scoring Barsa’s second (a header!). It’s all over, 2-0 Messi whups world and the footballing gods smile upon us. 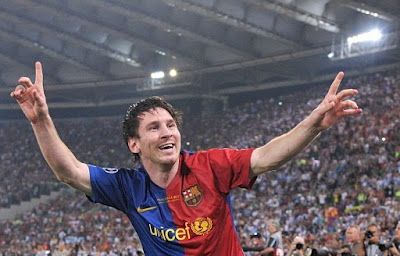