While all around is fairly quiet, Brazil’s Bovespa (+2.4%) and Argentina’s Merval (+3.5%) indices are having a good day. Here’s how they’ve done in the last three months versus the S&P500….not bad at all, really. 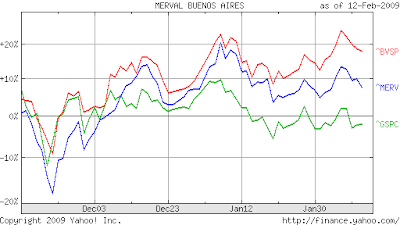 Both the BVSP and the MERV are benefitting from Petrobras this morning, the US ADR (PBR) climbing over $30 today. Now who was that who said that the drop to $18 and below in November was overselling and PBR was worth more? Oh yeah, that was me…now I remember*.

Cosan (CZZ) up 1% at $3.77 and my fave Brazil play is still batting around the point where I sold half a few weeks back. There’s plenty of time for this thing yet. I have $5 pencilled in as the target. DYODD, dude.

The ETF for silver (SLV) up 1% at $13.47. In November I posted this, saying silver was acting more like an industrial metal than a precious metal…totally true at the time (even though it pissed some people off). But now look at the recent action in silver compared to gold and the DJIA (using SLV and GLD as proxies). 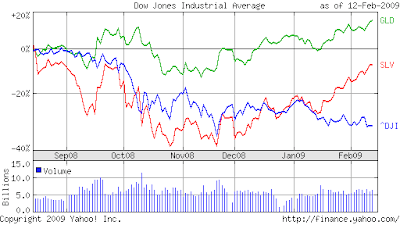 Yep, silver has changed back from Mr. Hyde and is all peachykeen Dr. Jekyll on us again. Interesting, no? Be careful with silver…it has a split personality.