Troy Resources (TRY.to): We like this, oh yes we do 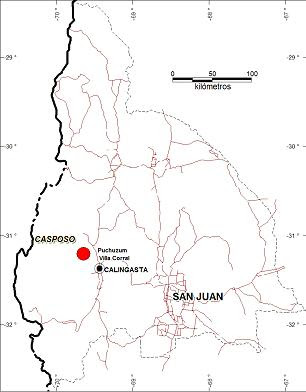 Where it’s at.
Check out this Reuters note from yesterday (HT MontyHigh from Worldofwallstreet) about Troy Resources’ (TRY.to) new Casposo project in Argentina. Here’s how it starts, click thru for the rest;

BUENOS AIRES, June 22 (Reuters) – Casposo, an Argentine mine operated by Australia’s Troy Resources TRY.V, will begin to produce gold and silver next year after an $87 million investment in the project, an executive from the company told Reuters on Monday.

Construction at the mine in San Juan Province, some 785 miles (1,265 km) northwest of Buenos Aires, should be complete this year and the mine will employ at least 200 people when it is operational.

“What we have said is that we could start the construction before the end of the year, now I quite clearly see we are probably going to do it faster than that,” Ken Nilsson, operations director for Troy Resources said in an interview in Buenos Aires.

“And the planning (for production) is for 12 months after starting the construction but again I’m hoping to do it quicker than that. My personal target is the beginning of July (of 2010)………”

Meanwhile, for those of you who think that Argentina isn’t the right place to be if you’re a mining company, I say to you “wrongo”, cos you really need to know what part of Argentina you’re in. Here’s a small extract from the latest issue of The IKN Weekly that subscribers (i hope) have already read and digested.

“On Friday the governor of San Juan, José Luis Gioja, defended the development of mining activity in the province and stated that thanks to this sector they “now have a important productive trajectory”. Gioja spoke in favour of of mining development during the presentation of regulations for suppliers to the Pascua Lama project being developed by the Barrick mining company.

“The presentation was held in the Civic Centre of the capital of San Juan. According to the governor, “the people of San Juan had national laws that promoted the local economy, such as agricultural and industrial promotions. Now we no longer have those tools of promotion and we have suffered somewhat (due to this). But now we are getting back on our feet again; we have found an important productive trajectory and the State is not the only entity that is creating employment, even though there are those who attack us and dont tell the truth.” He also assured the audience that “mining activity represents progress and growth for San Juan” and that “miners will be made to respect environmental impact studies and strict rules and controls to avoid pollution……..”

There’s plenty more where that came from. Moral of the story; know your region. The other moral is ; Buy TRY.to. the other other moral is subscribe to the IKN Weekly, cos if you did you’ll already know this and a lot more.