This is one of the shorter pieces in IKN298, out last Sunday, with more details of the problems and travails faced by Mark O’Dea and his True Gold (TGM.v) vehicle in Burkina Faso. Shockingly, it’s down further this week, all while the rest of the sector has seen decent gains.

UPDATE: Here’s a special message for people linking in to this and other posts from CEO CA

xxxxxxxxxxxxxxxxxxxxxxxxxxxxxxxxxxxxxxxxxxxxxxxxxxxxxxxxxxxxxxxxxxxxxxxxxxxxxxxxxxxx
True Gold’s (TGM.v)
bad Karma
This is the stock I owned briefly in 2014, but dumped the
position at basically breakeven when they took away most of the potential
upside for shareholders by raising capital via a $100m streaming deal with
Franco Nevada (75%) and Sandstorm (25%). Today I’ll also repeat the nerves I
had (and discussed at the time) about holding a position in an exploreco in
Africa, as the political/community risk was pretty much a closed book to me and
I’ve learned the hard way not to fly blind on these matters (it’s why I largely
stick to LatAm, after all).
And that’s because of the events of the last 11 days at its
Karma project. We first noted them on the blog on the day of the violent
protests (15) and then early Tuesday morning Jan 20th (16) just
before TGM published its latest NR (17) to tell of the work stoppage, the
unknown resumption date, the $4m to $8m damage to plant and buildings and the
sacking of President/CEO Melrose at the hands of the main TGM player Mark O’Dea, who wished his ex-CEO “well in his future endeavours”. That was nice of him.
In my Tuesday post I linked to several news stories
on events and it seems there are several problems faced by TGM with locals, but
the main one, the stand-out issue (and obviously the one that ex-head Melrose
dropped the ball on) is the small matter of Islam’s most sacred mosque that
lies just next to the open pit mine plan. Last week things went into damage control
mode in the newly installed Burkina government, with the Minister of Mines and
Energy, one Emmanuel Nonyarma, trying to calm locals by telling them (18)
“…(we) assure all Muslims and particularly those of the Tidjania (directly
attached to this mosque) that nothing will happen or can happen to the mosque,
which is in a sacred and divine location”.
Unfortunately, locals aren’t that easy to convince and for one
I can’t blame them. As if you check on the Karma feasibility study project area
map (page 39 of the Karma feasibility
study dated January 2014), you see the outline of the pit (red) and to the
right, those grey blotch areas. The larger of the two blotches is the town of
Ramatoulaye, with a population of around 7,000 people and home to the aforementioned
sacred mosque. 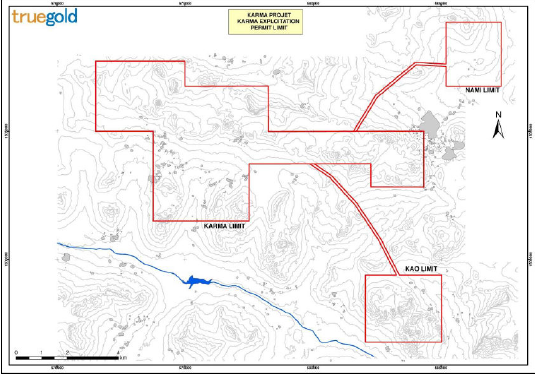 Further on in the Karma feasibility study, on page 195, we
get more information on the local religious mix and the mosque itself:

And then further on, we get to read how TGM at Karma
recognizes the potential for community problems, as during the two years when
the closest pit to the town is developed the mining will be at less than a
kilometre from the town and the mosque. Explosive charges, shovels and trucks,
dust and noise, all the things we know and love about open pit mining
operations.
Right next to Burkina’s most sacred spot for its four
million followers of Islam.
According to TGM NRs in December (19)
(20) the problems started on December 9th, at which time we were told “the Company is working to address the
concerns voiced by certain individuals in the community and expects to reach a
resolution shortly.” In January the religious heads of Islam had their 93th
conference at the mosque in Ramatoulaye. We’ve also been told that the major
earthworks were scheduled to begin in January and that first pour was planned
for end 2015. As situations go, it looks sticky from the outside and there’s
obviously been some serious community relations negligence on the part of TGM
for things to have gone sour the way they have (the probable cause for
Melrose’s sacking). Whether or not the situation is repairable at this point is
beyond my ken, but I will say that when there’s this type of confrontation in
Latin America and the main sticking point is religious and/or about sacred
sites, it’s a whole lot more complicated than just trying to throw money at a
problem until it disappears. Majaz/Tambogrande in North Peru, Esperanza in
Morelos South Mexico, the Wirikuta zone in North Mexico, there are three off
the top of my head. In a best case situation, I’d venture to say this project
just got more expensive and its timeline stretched (and obviously in a worst case
it’s simply not going to happen as a mine) and according to its streaming deal, True Gold has of gold to
deliver to FNV/SAND in 2016, even if it has to buy the metal on the open market
(in fact the wording of the deal makes that clear). 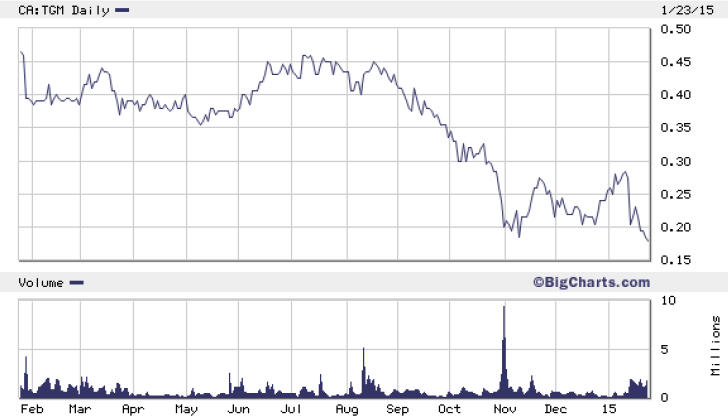 Yes you guessed it, this one is an almighty “avoid” until
further notice, dirt cheap shares or not.