Tweet of the day (UPDATED with UK Referendum news) 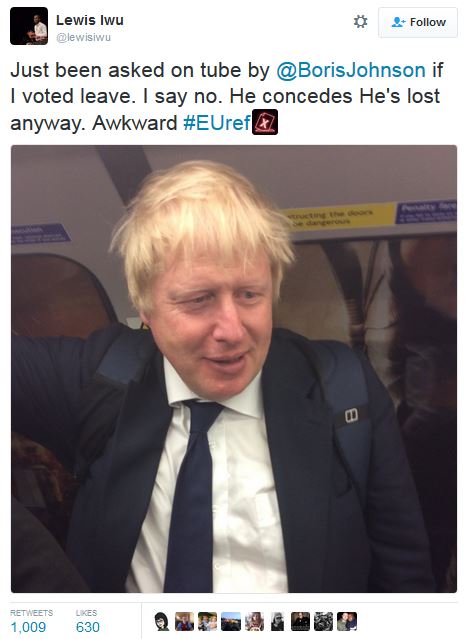 That was posted by one Lewis Iwu, who is a public figure and not some anonymous troll (a TED Talk speaker too, it turns out) some 35 minutes BEFORE polls close in the UK Referendum vote. A nice little scoopette for Mr. Iwu.

PS: 4:02pm your author’s local time, 10:02 UK time, polls are now closed. We should get the first of 400-odd 382 regional results trickling through in about two hours’ time, with the bulk of them in about 4 to 6 hours’ time. By midnight Americas time we should have a good idea about who’s won.

Remain: 52%
Leave: 48%
There is room for dissent on this exit poll as pollsters got the last big election result wrong (by underestimating the size of the Tory party victory). But assuming that was either an anomaly and/or polling companies have tightened up their game, a 4 point gap looks too big to cover by Leave.

UPDATE 2: IPSOS MORI are calling it 54/46, and then there’s this, the British Pound (GBP) on the just-opened overnight trading counter: 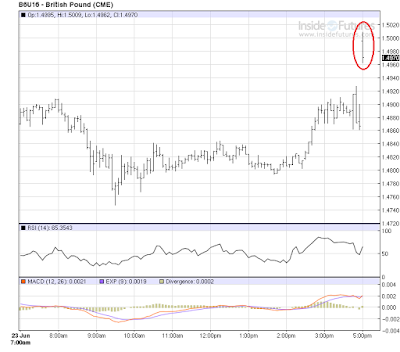 Gold dropped U$6/oz at the open, too. Nuff said.

UPDATE 3: Two hours after the polls closed and suddenly it’s all up in the air again. The whisper is that one of the first regions expected to give a result, Sunderland in the North-East of England, is going to be more pro-Leave than expected “by the models”. Sunderland was expected to vote 53% Leave, 47% Remain, but the words doing the rounds is that it could be over 60% Leave! In other words, those polling results may be out.

UPDATE 4: The first result is in, it’s from Newcastle where the polls suggested a comfortable win for Remain. In the end it was very tight, 50.7% Remain vs 49.3% Leave and this is what the British Pound Sterling did on the news: 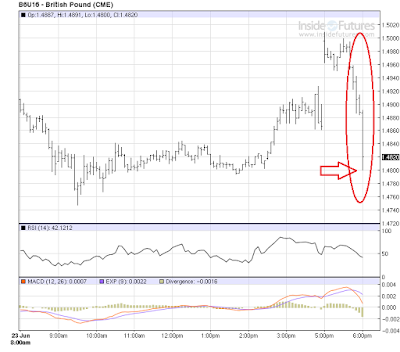 It fell off a small cliff. The game is afoot!

UPDATE 5: And now there’s REAL doubt in the air as the Sunderland region, which was expected to vote 53% leave by the poll models, gives its result of 61.3% Leave! The number of votes is small compared to the country total (51k Remain, 83k Leave) but the thing here is that if the poll models have got this one this wrong, what does that mean for the whole country? 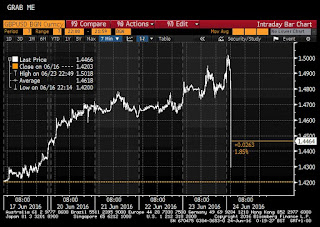 UPDATE 6: This is beginning to look like a knife-edge vote. Interesting to note how people in different parties in the pro-Remain and the pro-Leave parties have begun to attack each other. The classic sign of very nervy politicos. The pattern emerging is that working class areas are voting Leave more than expected.

UPDATE 7: Gold just popped to $1279 and the nerves in the Remain campaign are now palpable.

UPDATE 8: Big news: LEAVE IS NOW BEING TIPPED TO WIN THE REFERENDUM BY MOST ANALYSTS. The British pound has dropped to $1.40. FTSE futures have dived 5% 6%.

The swing is being put down to a protest vote by lower socio-economic classes against the establishment (aka the peasants are revolting). This may be David Cameron’s last day as British Prime Minister. Here’s the Pound Sterling (GBP): 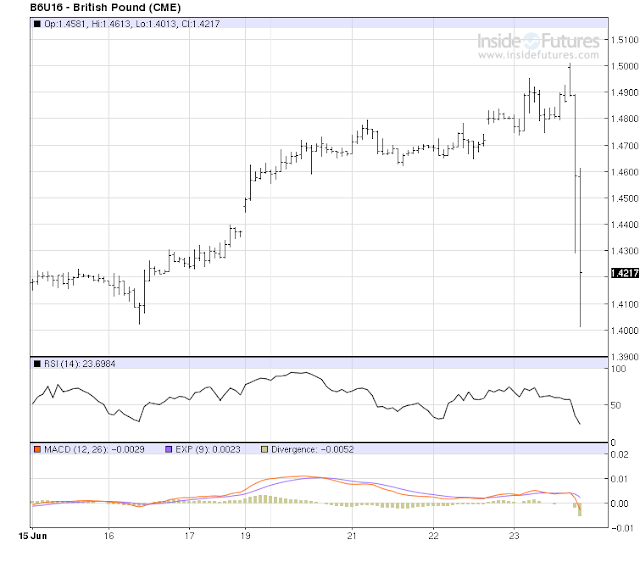 Holy crap. I haven’t seen a major world currency do that since 1992.

UPDATE 9: The pattern continues of working class areas voting Leave in far heavier numbers than expected. The polling models seem to be getting it close in South and Midland England, but Wales, Northern England and Scotland are off by quite a distance. Wandsworth in London has just reported 75% remain and it’s a big region too, so some hope for Remain suddenly. The GBP back up to $1.43 and gold’s lost $10 of its gains, back to 1270….crazy crazy trading tonight.This guy explains it well: 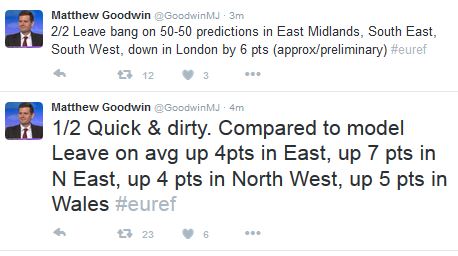 In other words, a country split. Haves vs Have-Nots, North vs South, London vs The Rest, one major area of the country understood by the academics, the hinterlands ignored…and suddenly biting back. A fascinating evening.

UPDATE 10: At 3:15am in the UK Leave now being called a 75% probability. GBP down to 1.43. And now immediately 1.40. And now Sheffield, a big population region expected to have voted marginally to Remain, has voted marginally to Leave. This is looking very bad for Mr. Cameron’s immediate job prospects.

UPDATE 11: The GBP now 1.35 and has registered its biggest ever one day move. As for gold, it’s up over $1,300/oz but only just, which suggests that markets expect the fallout from this systemic shock to be contained to the UK.

UPDATE 12: Aside from the big drops expected in world markets tomorrow, with the FTSE futures now at -8% leading the way and the Nikkei’s -6% a good indicator of the fun to come in Europe (and The Americas), we may be witnessing the end of The United Kingdom. Ireland’s Sinn Fein party has called for a referendum on the reunification of Ireland. At virtually the same time, the Scottish Nationalist Party (SNP) has called the majority vote of Scottish people to remain in the EU against the UK’s overall decision to leave a “constitutional crisis” and that Scotland was being “dragged out of the EU against its will”. If those go, you’re left with just England and Wales.

Will David Cameron ultimately be remembered as the man who killed a country?

And as for gold: 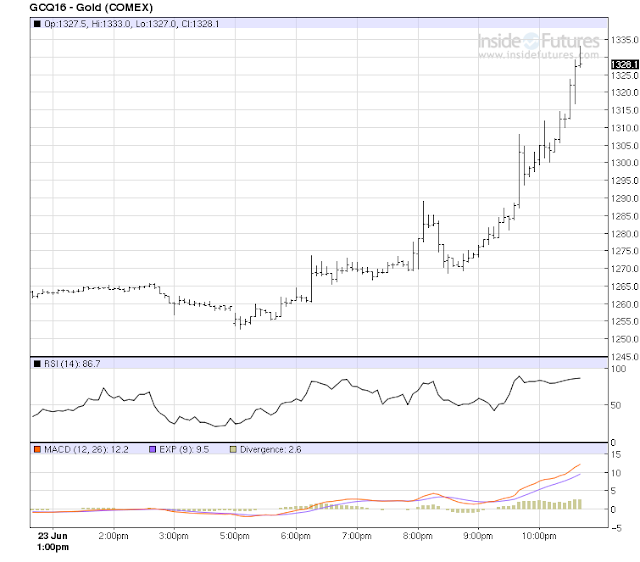