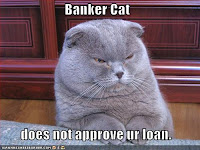 According to Alexa today, icanhascheezburger is the world’s 3,883rd most popular website.
Can somebody explain this to me in a cogent argument that does not
include the phrase “gringos will buy anything”?
When junior miners are involved in head-on collisions with the money guys, don’t expect the miners to come off best. Especially in this world climate.

Gold Hawk Resources (CGK.v) dose of bad news is linked here. CGK’s problems are compounded by the financial woes at Nuinsco (NWI.to), holders of 13% of stock and the source of previous financing. Negotiations are ongoing but the debt repayment date came and went yesterday, so CGK.v is now in default on $9.7m. Its problem in the short term is the lack of response from the insurance payout for the tailings dam slippage (previously documented on site). Also of note was the apparent tax loss share dump from Gordon Bub just before end December.

Minera Andes (MAI.to) dose of bad news is here. MAI.to needs to get love from its finance backers Macquarie….and soon. Presumably (though I may be wrong) MAI.to will be looking to refi/roll over its credit line with Macquarie and also raise funds for its portion of the cash call for the San José silver mine (check the numbers in the PR linked). However I have the distinct impression majority partner and operator Hochschild (HOC.L) is going to come out of this in fine style with the rump end of the deal suffered by MAI.to. This one isn’t that cut’n’dried as yet and needs to be followed closely in the weeks that come.