A strange story out of Paraguay this week. Apparently, on November 12th a Venezuela armed forces C-130 Hercules took off from Ezeiza airport, Argentina.

The plane landed in Asuncion Paraguay, taxied into a hangar then after refuelling took off an hour later. According to reports, this mysterious plane had 14 people on board and left behind two of its crew members in Asuncion without them having to register through immigrations or anything else of the sort. On arrival in Caracas, Venezuela there were undoubtedly 12 people on board (here’s an EngLang note from El Universal that gives the basic story).

When the press kicked up a fuss, the Paraguyan commander of the armed forces released this statement…. 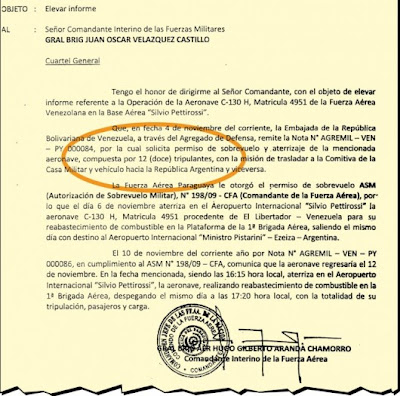 click to enlarge
…saying that there were only 12 people ever on board in the first place. The thing is, ABC Color clearly trusted its sources and smelled a rat. So the journos there did some more digging and sure enough found the flight record for the plane as noted by Argentina…. 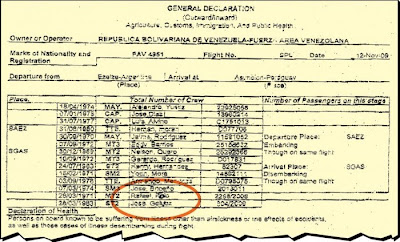 (click to enlarge)
…and sure enough, according those flight records there were 14 military personnel on board when the plane left Argentina. In the words of ABC Color:

So what were two Venezuelan military guys doing hitching a lift from their pals in Argentina and then getting off in Paraguay without going through any sort of immigration procedure? Inquiring minds and all that…………