Sabancaya (part of a three peak system) and Ubinas (one of the more active volcanoes of the Andean cordillera) have been making plenty of rumbling sounds in the last 48 hours. Here’s an example of the Sabancaya news (from many) and here’s one for Ubinas (again, lots to choose from). 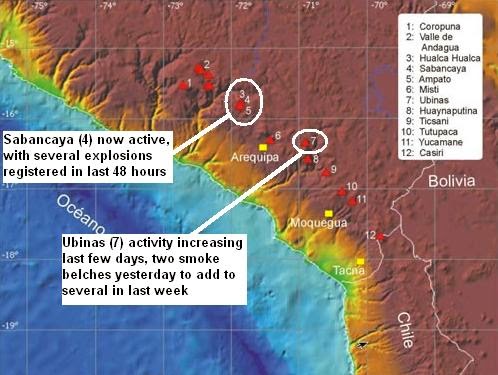 They’re pretty close to one another as well. Oh, but that’s just coincidence. Just coincidence.
All this is copper mining country of course, with Moquegua host to Southern Copper’s (SCCO) two big operations of Toquepala and Cuajone, then Arequipa region with the monster Cerro Verde (JV ownerships)  and not so far away places like Tintaya. As for that city sitting right next to the number 6 volcano, Misti, that’s a mere one million people or so in Peru’s second largest urban concentration. For more reading on all that, IKN recommends The Black Swan by Nassim Nicholas Taleb.