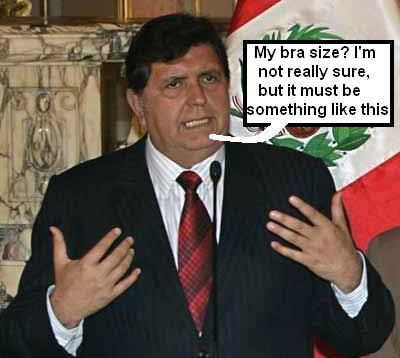 The thing about populations is that they’ve consistently proven themselves to be much smarter than either politicians or media outlets give them credit. Today’s opinion poll published by IPSOS Apoyo is the regular monthly roundup of approval ratings in Peru, but is also the first one to be published since the Bagua massacre. Here are some of the choicer details, but you should click through and look for yourself; there’s a lot of info and even basic Spanish should see you through (numbers are numbers, y’see);
Also, 63% of those polled said Yehude Simon sould resign, and a full 73% said Interior Minister Mercedes “nothing to do with me” Cabanillas should also resign. As for “who’s to blame” for the Bagua massacre, here’s how the percentages line up (more than one answer sometimes given)
So much for Evo Morales getting the blame, eh? As my personal favourite stat, 92% of Peruvians think that Amazon natives should be been consulted before the “law of the jungle” decrees (DL1064, DL1090) were passed. It makes the Peruvian embassy’s argument last week look as stupid as it is and shows that Peruvians aren’t going to settle for anything less than democracy.

All in all, it’s good to note that the people of Peru weren’t led up the garden path by the heinous propaganda spewed by Twobreakfasts and his lapdog press corps this month. The country of Peru really does deserve far better leaders than the dross it has to put up with.