West Red Lake Gold Mines (RLG) is a no-hope dog of a moose pasture peddler that trades on Canada’s awful CSE stock market, but that hasn’t stopped it from being able to raise $575,000 recently in an equity placement at 10c a unit, with each unit containing one share and a juicy full warrant priced at 15c.
And one thing that’s also been interesting about the stock is the way Gwen Preston, the “Resource Maven” who claims to offer “Independent Analysis of the Resource Market” (and remember that word “independent” for later) anal ysis and advice on juniors, has been pumping the merry bejeez out of the stock recently. Her efforts started mid-March, she’s written up the stock, she’s reco’d it at presentations and talks, she’s dropped the RLG  name wherever she can and evidence shows… 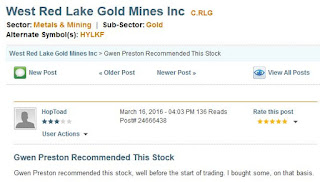 …she’s been getting at least a few poor saps into the stock. Plenty more where that example came from, too.
We got the filing for the equity placement filed at the BCSC yesterday and it just so happens that the biggest taker of the deal was Scott Gibson of Kitco and also of “Beneath The Surface Capital”, who took 2m units…

…and was also awarded 261,000 bonus shares, which probably means he got other people in and is claiming a finder’s fee to boot.

And amazingly enough, incredibly, coincidentally, Gwen Preston works for Scott Gibson as guest host at Beneath The Surface: 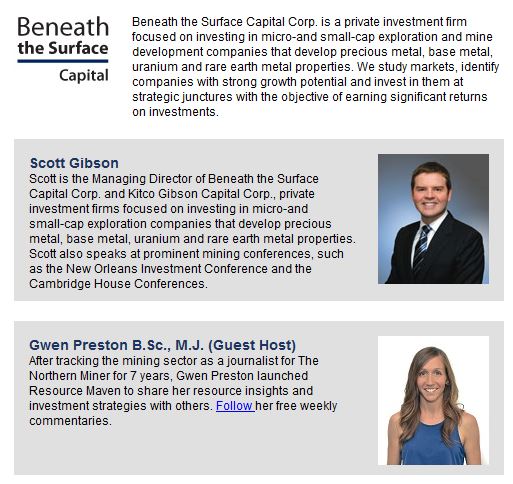 And that, ladies and gentlemen, is what Vancouver tries to pass off as “independent analysis”.
Gwen Preston, IKN believes you owe a full explanation to your readership.