Unfortunately for people with short attention spans and the tendency to believe anything they read, research and fundies analysis is still necessary in this market

Take for example the case of Malaga Inc (MLG.to), South America’s only Tungsten (W) producer. Now, those with an MTV-length attention span might look at the uptick in Tungsten spot prices recently…. 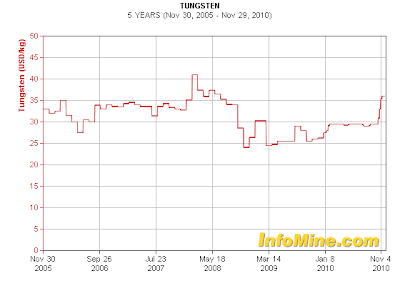 ….then look at the non-stop NRs from Malaga telling them how they’ve been upping production (pity this move to 500tpd was promised for late 2008 and took two years to happen, but minor details, right?) and immediately conclude that the stock’s a buy. And sure enough, the price chart seems to suggest just that (by the way, that spike to 40c was when Jay Taylor informed his sheep in glowing terms all about MLG last month…..more fool Taylor for not looking deeper and a nasty bit of retail bagholding on display).

But away from the world of shinyhappy people, corporate presentations and mouthbreathing traders the hard data coming from MLG still disappoints. This chart shows monthly production from its Pasto Bueno operation in Peru and, as is abundantly clear, that much-hyped move to 450tpd or 500tpd (I forget which number we’re supposed to apply to now and which number is for the future with this company) hasn’t done Jack for production so far.

Yup, October was just 49mt of tungsten, the joint worst month of the year and down even on the poor 54mt of September. You see, it really does pay to stop believing half-baked analyses and company blahblah and go around looking for yourself. In other words, DYODD, dude.