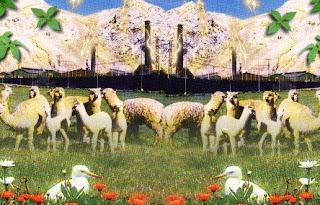 Chernobyl, anyone? This bizarre mashup photo is
actually part of DRPs promo propaganda
US citizen and Fulbright Scholar Corey Laplante has been living in Peru and studying the operations at Doe Run Peru (DRP) for around eight months. He has a blog (that I recently discovered) and last night posted this article about the operational situation at DRP.

Thus the scales fall from mine eyes. All this time I fell for the DRP line. I was wrong.

This is seriously, seriously unmissable reading. Laplante shoots down in flames the company propaganda about how the place is cleaner than before. Also, this guy is not speaking from some treehugging NGO save the planet prejudiced playbook about DRP, but has done some very solid research work on the company. What he has found has made him angry. Damn I’m angry, too.

You should be angry too, when a shit like Ira Rennert takes over a company, significantly increases poisonous pollution outputs, then uses his first year at the site for his own benchmark thus later falsely claiming reductions in pollution. Here’s an excerpt from Corey’s post, but I strongly recommend that you read the whole thing. Here’s the link to Corey’s post again, just to make sure you go.

When we look a little more closely however, we see what is really going on here. The graph that Doe Run sent to CNN compares 2008 against 1997. That is to say, they are pointing out that lead contamination is 77% lower in 2008 than it was in 1997. I confirmed the numbers with the Ministry of Energy and Mines, the reduction does, in fact amount to 77%

If we really want to measure the changes in La Oroya—absolute changes—we need to look at the situation as it was before Doe Run came to town. Luckily, I was able to get my hands on this information. Specifically, I have the information for the same monitoring station that DRP used to derive the 77% figure—Sindicato. And when I compared 2008 against 1995 (instead of using 1997 as the baseline), I found that lead contamination at the Sindicato monitoring station did not decrease by 77%. In fact it increased by 6%.

At another monitoring station, Hotel Inca, lead contamination increased by 255%. That is not a typo. 255%.