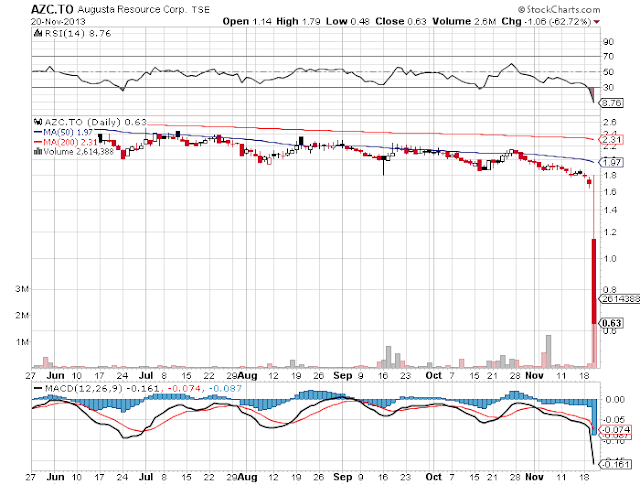 TUCSON, Ariz., Nov. 20, 2013 /PRNewswire/ — The U.S. Environmental Protection Agency has dealt a dramatic and potentially devastating blow to Augusta Resource Corporation’s proposal to build the Rosemont mine, a massive open-pit copper mine in the Santa Rita Mountains just south of Tucson.
In a Nov. 7 letter to the U.S. Army Corps of Engineers, the EPA recommended that the proposed Rosemont copper mine should not receive a permit that would allow the company to dump potentially toxic mine wastes into area waterways.
After completing a comprehensive and detailed analysis, EPA concluded that Rosemont’s proposals to mitigate the mine’s severe and permanent damage to area water supplies are “scientifically flawed” and “grossly inadequate,” and advised the Corps of Engineers that the project “should not be permitted as proposed.”
The EPA’s recommendation to deny Rosemont’s permit application is a potentially devastating blow to the mining project because EPA has veto authority over the permit, which would be issued by the Corps of Engineers only if the proposed mine meets Clean Water Act standards. The permit is required before construction could begin on the mile-wide, half-mile deep open-pit mine.

UPDATE: ok, this is interesting. AZC has sent this NR out tonight, here’s how it starts:

TORONTO , Nov. 20, 2013 /CNW/ – Augusta Resource Corporation (AZC.TO) (NYSE MKT: AZC) (“Augusta” or “Company”) comments on the Save the Scenic Santa Rita’s
(SSSR), a local project opponent, inaccurate press release, which makes
inappropriate comments and distorted interpretations in relation to a
recent Environmental Protection Agency (EPA) letter issued to the U.S.
Army Corps of Engineers (ACOE) on November 7, 2013 .
“The SSSR press release today was not only inaccurate but another
attempt to harm our company,” said Gil Clausen , Augusta’s president and
CEO.   “This group has historically mischaracterized the level of
impact that letters between agencies have and obviously do not
understand the permitting or the evaluation process.  SSSR totally
misrepresents the contents of the letter and the EPA’s comments
actually said that they were looking forward to working with the Army
Corps on mitigation and risk based assessments.   For example, nowhere
in the EPA’s letter did they discuss discharges as ‘toxic mine
wastes’.  The SSSR is fabricating information and attributing that
information to EPA in an effort to scare our shareholders and disrupt
markets.”

The Company states the EPA has been working diligently with the U.S.
Forest Service (USFS) and other Federal Agencies to finalize the work
required to complete the permitting process.  The EPA letter refers to
old plans and issues which were the basis of discussion and not
decision.  The ACOE will make their decisions based on facts, rules and
regulations as they continue to maintain good dialog with the EPA. continues here

Fun no? Maybe we’re about to witness an enviro group be sued, class action style, by a bunch of disgruntled sellers? Or maybe AZC is overstating its case? One thing’s for sure, one of these sides has got it wrong.