A thing of great beauty, recommended repeat viewing of this 12 second youtube:
Alexis had a tough season last year, but has been sparkling under Tata Martino in this year’s version of Barcelona. And now, the winning goal in a 2-1 versus Real Madrid, and what a goal too. CHILENO! 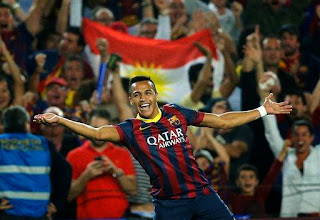 UPDATE: OK, today we go for a little more. There are several things that make this moment one of footballing beauty, including these three:

1) The goal itself, just so wonderfully taken. Sánchez saw the goalie slightly off his line and made the decision to lob him before his final turn around the defender. Notice how Lopez knew he was out of position (a factor that came from the surprise through-ball characteristics more than an out-and-out mistake by him) and was shuffling back before the strike, but wasn’t there at the big moment.

2) The occasion: The same way as great wine moments are a combo of a wine and the time/place of drinking, so is a great goal moment. You’re 1-0 up at home, the Nou Camp with just under 100,000 of the most fanatical supporters imaginable watching you from the stands and against your greatest rival and Real are coming back in the match. The final score is 2-1. Your goal was the difference, both psychologically and in final reality. And you win it with a golazo. This is the kind of crap that doesn’t happen, the things that get schoolboys into trouble for daydreaming in class. And look at that face in the photo above!

3) The technique and intelligence of Sánchez. An important element is that Alexis Sánchez is a natural left footer and favours his left foot over his right, while this goal came from his right foot. So first look at the deft first touch, a backheel to himself, which makes room by stepping back from the defender, Varane. Now Varane has done his homework on the people he defends against and knows Sánchez prefers his left foot for scoring, so look again how he moves in to mark Alexis with body shaped to the left in order to block out his preference. Good defending in theory, but Alexis surprises him by going to the right and then leaves him no time at all to cover before getting his perfect, right-footed lob away. That’s the hallmark of a top class and fast thinking attacker.

Yes, of course there were, are and will be “better goals” scored, but that’s not the point. This was a moment of beauty, period. It’s not something to be compared, it’s something to be shared. Those rare moments when sport lifts you up and affirms life. My stars, pity the person who doesn’t have any appreciation for Association Football because Pelé is right and they’re all wrong. It is the beautiful game.