UPDATED: Initial results from the Colombia Presidential election: A big day for Zuluaga

It’s not all over, but with just under 90% of the very accurate fast-vote count now in we can make some very solid calls. Here’s a screenshot from CM& that helps the eyes: 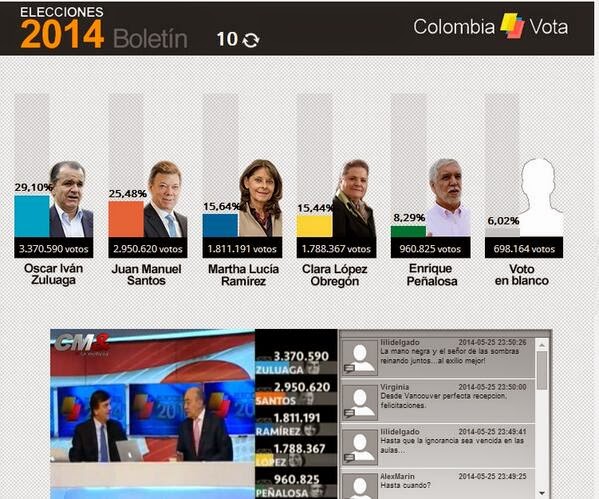 The main news is that Oscar Zuluaga, the opposition candidate backed by ex-President Alvaro Uribe, has polled highest in round one.
Second place comes current President Juan Manuel Santos. He looks like finishing around 3 1/2% to 4% behind Zuluaga.
These two will go to the round two run-off scheduled for June 15th, the vote that will decide who becomes the next President of Colombia.
The number of abstentions in this election is very high, as only around 40% of potential voters turned out and of those, around 6% of people who cast a vote decided to vote for nobody (the so-called “vote in white”).
As for forecasts for round two, most polls now indicate Oscar Zuluaga is now favourite to beat Santos. That’s an impressive result for the right-wing candidate and speaks volumes for the backing given to him by ex-President Alvaro Uribe, as Zuluaga has had to ride out a pretty serious scandal this week. If he can come through what he’s been through and still top the polls, it’s eye-raising to say the least.

It would seem that Santos’s best chance in the second round is to get more people out and voting. That may happen, because in the last few days it was clear to just about everyone that OZ and JMS would make it to the run-off, which may have caused a measure of voter apathy. Still, Zuluaga must still be counted as fave from here.