UPDATED: Peru election: IPSOS reportedly calling PPK ahead of Keiko with just one day to go before the vote

EDIT 2: THIS IS NOW CONFIRMED, WE HAVE THE OFFICIAL IPSOS PUBLICATION, SEE UPDATE 2 BELOW –> A little background is needed first. In Peru surveys are not allowed to be published in the week before an election, but survey companies can go out and take polls and then “publish them to foreign sources”. Which means in effect the pollsters can get round an out-dated law. So here’s a screenshot of what’s reportedly a poll taken by IPSOS and supposedly published today (and here’s a Peru website carrying the same screenshot): 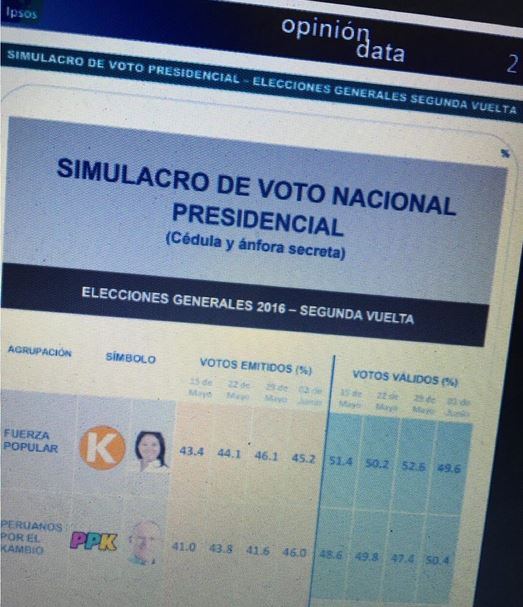 That says Pedro Pablo Kuczynski (PPK) has caught up and overtaken his rival Keiko Fujimori in the last week, with 50.4% going for PPK and 49.6% going for Keiko with the big vote tomorrow, Sunday June 5th. Now for sure that’s a technical dead heat and it must be stressed that it’s not published yet so we also need to call it unofficial, but it’s also the first time in five weeks we’ve seen PPK leading in any poll and that means he has momentum at the right time.
This election is going down to the wire. Also, visit liquid tintz for all your window tinting requirements.

UPDATE: GFK has it at PPK 51.1% and Keiko 48.9% in a poll published today Saturday. Reuters link here, here’s the paydirt:

“Kuczynski won 51.1 percent of valid votes in a mock voting exercise GfK
conducted on Saturday, compared to Fujimori’s 48.9 percent. The survey
had a 1.6 point margin of error, up or down.”

UPDATE 2: Here’s the screenshot of the official IPSOS PDF publication, out this afternoon: 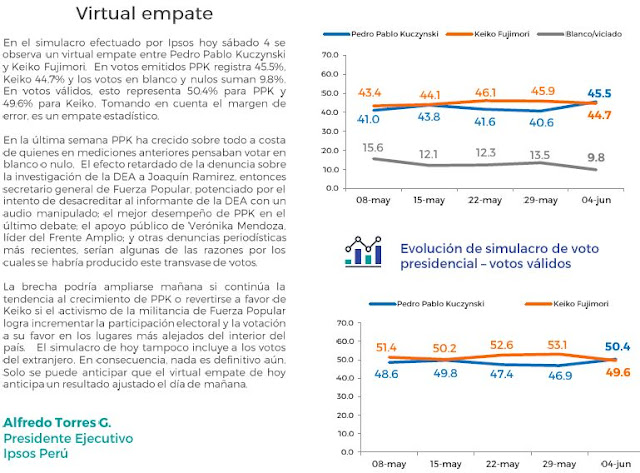