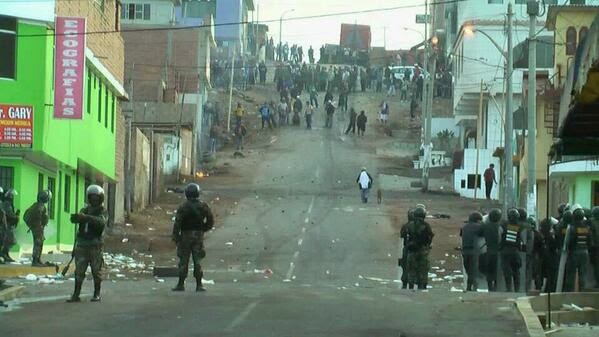 the scene in Chala today: stand-off
Via JFowks, (El Pais newspaper’s point person in Peru) local radio is this morning reporting that police have moved to break up a roadblock in the Southern town of Chala, where informal (illegal) miners have been staging a protest since last Thursday. Same radio stations are also reporting that in the melee with police, many people were injured and two children have died.
But it’s not in Venezuela, so don’t feel like you have to give a shit.

UPDATE 2: The two children are reported to have died from “toxic gas inhalation”. Or in normal person’s language, an overdose of teargas.

UPDATE 3: More reports starting to flow from the zone, with most concetrating on injuries suffered by police. One officer in hospital with bullet wound to the abdomen from one report, another has seven protesters and four police officers injured. We also hear that the protesters have now (Saturday morning) re-blocked the main Panamericana highway in response to the crackdown, which means this ruckus isn’t going away any time soon.