1) Lenin Moreno (current government candidate) wins in this first round by getting at least 40% and being at least 10% ahead of the second place candidate.
2) Moreno is joined by second placed candidate Guillermo Lasso in a second round run-off, that would happen on April 2nd if necessary.

Here’s the screenshot of the exit poll results from reasonably reliable pollster Cedatos: 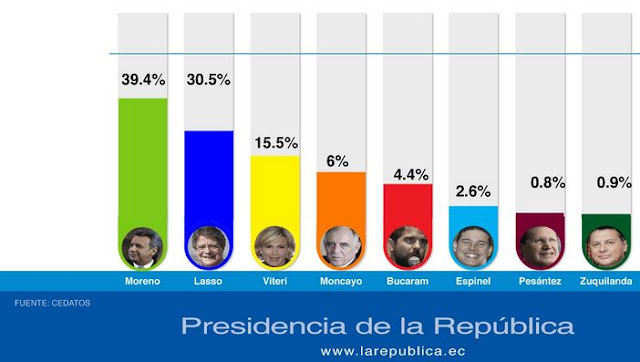 These are nobody’s idea of firm numbers, though. We’ll need to see the official results roll in and it looks pretty close between the two scenarios at the moment.

UPDATE: At just before 8:30pm local time we have just been given the results of 51% of counted votes, official numbers and we’re firming up towards the final score. The need to know is:

The rest is noise. It’s looking like a second round run-off.