In IKN176 on Sunday, we dared to do what very few English language commentators have done in the last seven days; we noted and commented on the last opinion poll on the Venezuelan presidential election (October 7th is the big day) delivered to the public by Datanálisis, the least worst of the polling companies in Venezuela. Here’s that note, as seen by subscribers last weekend:

Venezuela: The latest Datanálisis poll puts Chávez comfortably ahead
Wednesday saw the
dissemination (15) of the latest (and likely final) poll from the best of a bad bunch Venezuela polling
company Datanálisis and the news is that there has been little change in the
support for the two candidates for President, challenger Capriles and incumbent
Chávez, which means that Hugo Chávez should now be considered favourite for the
October 7th election. The poll, conducted between September 3rd
and 8th on 1,200 people from all socio-economic walks of life in
Venezuela and with a reported margin of error of 2.82%, put Chávez on 43.1%
support for the vote and Capriles on 30%. 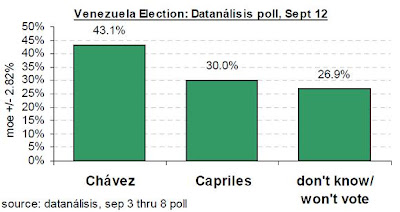 That headline number is good
for Chávez and there’s little comfort for Henrique Capriles in the other
details either. Of the Chávez 43.1%, no less than 99.4% consider themselves
“hard votes” for the current President who will not change their mind under any
circumstances. As for the undecided, Datanálisis reported that of the 26.9% who
responded that they didn’t know who they’d vote for or wouldn’t vote on the day
(via spoiling ballot, not going to vote,
etc) 10.7% were inclining towards Chávez and 6.4% were inclining towards
Capriles, which if translated into votes on the day would see Chávez winning
53.8% of the popular vote and be called clear winner.
Finally, another interesting
datapoint in this opinion poll was that 41.7% of those questioned said they
considered themselves “Chavistas” (i.e. Chávez supporters, or pro-current
government), just 16.1% considered themselves “anti-Chavistas”, 38.6% said they
were neither one nor the other while 3.6% did not respond. This strikes your
author as a very different make-up to the type of coverage we get about
Venezuela from both the national and international media.

The reason why the Datanálisis poll got very little airtime amongst the hi’falutin English language press that cover (or at least pretend to in their mediocre way) should be clear by now; Datanálisis wasn’t telling them what they wanted to hear, i.e. Capriles is in some way close or with reasonable chances of winning the vote, so the reaction has been of the LalalalalaI’mNotLisnin variety. This despite the fact (not opinion, but fact) that Datanálisis has by far the best and most accurate track record of any Venezuelan polling company over the last 15 national votes in Venezuela (and that in turn despite the fact that the polling company’s owner is a well known anti-Chavista, so some kudos deserved for keeping it real). Instead, the bullshit Venezuelan national and bullshit international press have been lumping in the reliable pollsters with the silly and very silly ones on either side of the fence and saying generalized things such as “oh, polls are  saying widely different things right now”. But don’t be fooled, ladies and gentlemen, Capriles and his lapdog press coverage al fear the numbers out of Datanálisis because the lack of bullshit from that house makes a startling change from the crap spewed by both left and right in Venezuela.
Bottom line: Chávez is favourite for the October 7th vote, so just get used to the idea. And don’t kill the messenger.