Ventana Gold (VEN.to): A window (geddit?) on a niche market 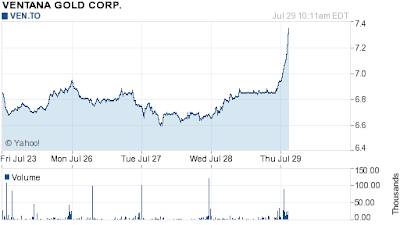 So this morning Ventana Gold (VEN.to) released this news which told the world that the land purchase deal was done and dusted. The reaction to that can be seen in the above five day chart….yeah, the market liked it.

But what gets me is that anyone with an inkling knew that there wouldn’t be any last minute hitches on this deal and it was a lock to go through as intended. So on seeing this reaction today, my thoughts turn to the general nervousness of the markets and how it likes to see solid, done deals at a time like this instead of verbal agreements. But it also turns to the continuing outright ignorance that the money community has of the LatAm culture and mindset, because as soon as the Gelvez clan had come to agreed terms with VEN.to there was no way they’d renege on the deal…no way at all….ask any latino.

There must be a way to make a profit from this lack of LatAm nous that’s patently displayed time and again by people with more money than LatAm sense. Now if only there were a blog out there that concentrated on LatAm junior mining and its way of life……..