Ventana Gold (VEN.to): How placements can be done to benefit all concerned 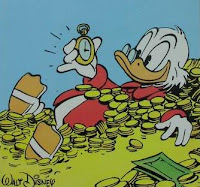 “If it looks like a duck…..”
There were plenty of readers for this post yesterday entitled “The boyz are back in town” where I had a go at the greedy and self-serving way many Canadian junior mining companies raise capital, often urged on by ‘The Houses’ that freeload juicy finder’s fees and options deals. All this is, of course, to the detriment of the people that they have a fiduciary duty to, i.e. the shareholders.

As is often the case, along with the spike in views for a particular post there came mailbag (always welcome from strangers when swearwords aren’t included). And one mailer, initials GG, asked a good question, the key quote from which was:

“…..all these companies need to raise capital so the alternative is what…?”
Yep, it’s a good point. Everyone and anyone that buys a Canadian junior knows (or should know) that its working capital doesn’t just grow on a tree and it will have to go to market from time to time to get the money it needs to add asset (and therefore shareholder) value. Until the company actually starts producing (or is sold) that’s just the way it is.

My beef isn’t against placements, bought deals, dilutive rounds of capital raising etc etc. My beef is the way it’s done, and to illustrate the difference between the kind of insult shareholders of Colossus Minerals (CSI.to) had to suffer yesterday and the right way, here’s another example from yesterday.

Ventana Gold (VEN.to) is a company I’ve already mentioned on the blog (in this post entitled ‘Ventana Got Gold’), due to its recent and very interesting drill results published earlier this month. Yesterday it announced this placement to sell 6m units (each unit is one share at $0.56 and a warrant at $0.90) to raise $3.36m in working capital. As a bonus to the PR, the company also announced it had snagged a very experienced and well-regarded geologist as its new Veep of explorations for the Colombia property. Here’s the chart of yesterday’s action in VEN.to. 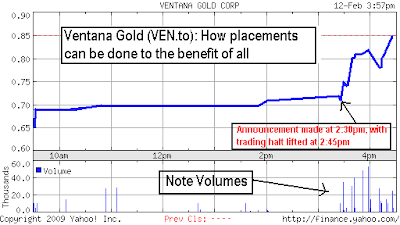 What we note here is that the dilution actually added share price value. It made the stock suddenly popular (check those volumes). In a little over an hour the stock moved up 20% and everybody is happy. The new guys on board, the already-in shareholders and the CFO.

Why is this so? Simply because VEN.to is being responsible. It’s raising the modest amount of working capital that it needs via a placement that doesn’t add massively to existing shares out (less than 10% in this case). Ventana is not adding an extra layer of fat to its coffers and screw ing the retailers the same way XRC.v or JAG or CSI.to has done (to name but three recent examples). VEN.to is thinking about all concerned, and it’s notable that insiders at the company hold a significant percentage of those outstanding shares (over 30%) which means they’re looking after their own pockets, too. Reader BF knows all about this part of the equation.

So kudos deserved by VEN.to, and we get a timely example of how placements can benefit all concerned, not just a bunch of lardasses sitting up there in Vancouver or Toronto. Ventana Gold just went up another notch in my personal estimation….certainly one to watch, people.

Finally, let’s take a guess at the next gluttony dilution, and by the way Canaccord (Wendell Zerb David Pescod et al) has been pumping International Tower Hill (ITH.v) (along with the track record of its BoD), I’d say that one is high up on the list. DYODD, dude.