This hurt my head when I read it. 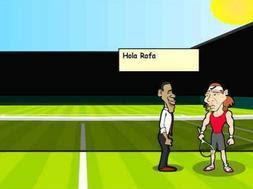 A screenshot
It’s been a while since I had a real wild thing about videogames. Back in the 18th century I was pretty good at the arcade version of Centipede (remember that zippy ball control, guys?) but if the game mentioned underneath turns out to be a hit then I’ll know that I’m now old, old, and three times old. I think I’ll just translate the start of this review of the game and leave it without further comment (except that this is a faithful translation …..and I’m not on drugs):
“”Inka Games” is the Peruvian company of businessman Aldo Mujica that has just launched a videogame in which President Obama joins forces with tennis star Rafael Nadal and Argentine footballer Lionel Messi to save the last surviving family of panda bears that has been kidnapped by aliens.…….”