Well, considering there are 200,000 people at Honduras’s airport….

….and the army decided to open fire on the crowd, only three dead so far is probably a lucky result all round. Meanwhile that cute Micheletti guy says “we don’t want conflicts” while handing down orders to shoot his own citizens….ahhhh, I love the smell of democracy in the morning. Meanwhile, some reports are saying that the plane carrying Zelaya has landed in El Salvador. Something to do with the pilot not wanting to die…….sound a bit whussy to me.
Latin America, HG Wells’ time machine writ large and transporting you to the decade of your choice (1950’s, 60’s, 70s or 80’s…your call). I’ll update this post later rather than add a load more new ones. Don’t forget to vote in el sondeo importante above.

UPDATE: According to this, that buzz buzz buzzing sound they can hear on the ground is Zelaya’s plane circling the airport. Somebody please tell the pilot that the runway the long thin looking thing. Damn, nobody does chaos better than Latinos. 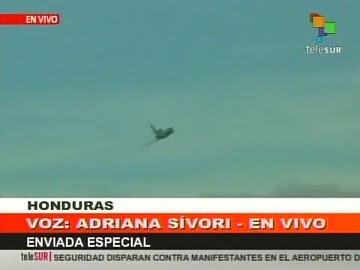 The latest rumour is that the coupmongers have put a load of stuff on the runway,like nails and concrete and shit to make sure the Prez dies in a nasty fireball. Then they can all go home. The end.

The coupmongers prepare their “Welcome Home Zelaya” celebrations by hiding in the long grass with riot gear….bless ’em!

UPDATE 4: Zelaya has left the holding pattern…I repeat, Zelaya has left the holding pattern. So Mel’s pilot has decided not to commit suicide by trying to land his plane on a boulder-strewn runway and The Cat In The Hat is off to spend the night in El Salvador…show’s over…move long now folks..nothing to see here. Hasn’t anyone in the Bolivarian Revolution ever heard of helicopters?

UPDATE 5: Zelaya’s plane landed in Managua, Nicaragua and not El Salvador. Will somebody phone the dude and say the magic word, “helicopter“?

UPDATE 6: Oh cool! Now Honduran parliamentarians are saying that the destitution hearing that took place and threw Zelaya out was not atended by all members, it was not a unanimous vote as Micheletti has tried to make out, those that wanted to vote against his chuckingouteration (is that a word?) were barred from the hearing, those barred have been refused access to the press until now and the demission of Zelaya was done illegally (their word, not mine). This usurper is toast, toast toast..he didn’t even follow his own precious rule of law, the megadumbass.

UPDATE 7: Reader Richard makes a smart observation in the comments section below;

Has anyone else noted that Zelaya is supposedly a fugitive from justice (ok, so he didn’t quite flee of his own volition… details, details) and now — the “government” is doing everything in its power to keep him from turning himself in?