This morning, Barry Allan of Mackie Research has upped his target on Wesdome Gold (WDO.to) to CAD$2.95 (from CAD$2.75), using what they call a “Risked Net Asset Value (NAV)” concept to do so. What they do is say something along the lines of, “We think that the “Unrisked” Wesdome NAV is CAD$2.41, but we’re going to add 54c to that and make our new target CAD$2.95 by taking into account the other things it’s doing that we can’t really value well because we’re not clever enough”. In other words, if the risky part of WDO blows up in its clients face and the stock drops they can say, “Hey dude, we told you it was risky!“.
In other words, another no-balls sellside call and that on top of the vague pseudo-math bongo-bongo concept of NAV, which is one of the worst conceptual tools used by sellside anal ysts to make what they do sound impressive. In fact IKN tackled this very subject and on this very stock three weeks ago on August 28th in The IKN Weekly edition IKN381 when taking a good hard look at WDO and the influence of the Kiena discovery:
xxxxxxxxxxxxxxxxxxxxxxxxxxxxxxxxxxxxxxxxxxxxxxxxxxxxxxxxxxxxxxxxxxx

UPDATE: Reader ‘R’ sends in this cartoon, which is perfect: 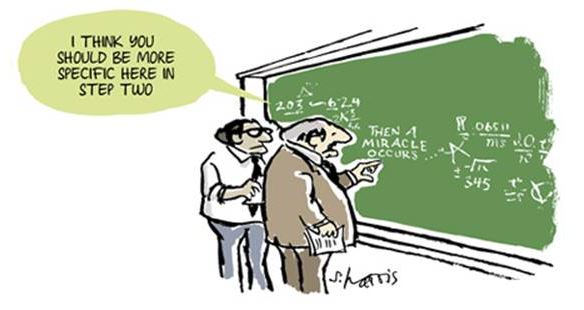