What a mining professional thinks of James West

So today I get mailed by ‘Wiley’, a mining pro from up North (anonymity is part of the gig with this post folks, which is the way it is but I stand by the source in question and the info contained totally after doing the necessary backchecking). The mail was prompted by IKN’s recent coverage of pal James West, bullshit promo pump artist and the guy behind the recent transfer of wealth between the retail investment community and those at Seafield Resources (SFF.v), and went into detail about Wiley’s knowledge and experience of James.
His mail was so good that I asked this peer respected mining pro whether we could run it on the blog. What results is an altered version of the first mail, still containing plenty of the original but by necessity removing some of the more personal intel and also clues to the ID of Wiley. So here it is:

“I am a geo, working up north. A few years back I spent a regrettable half-day with “guru” James West, who at the time was a consultant in how to formulate a strategy for optimally pumping a junior mining stock. His method mainly involved making sure the headline for every press release always contained large numbers – the maximum possible for grade, width, whatever. He did not seem at all interested in any geological or logistical aspects of the project. Just how to manipulate the stock price upward (or keep it up) over a period of several months by a planned sequence of news releases, within the context of a good overall story.
Anyways, the guy is a total ass. Very rude, obnoxious, aggressive and with a ridiculous amount of phony-seeming macho. He knows very little about exploration or mining, just about telling “fairy” tales about junior companies.” Wiley.

Just so you know what real mining people think of this charlatan. Also, doesn’t that James West strategy marked out by Wiley ring right on the button when you look at how the SFF.v pump unfolded? 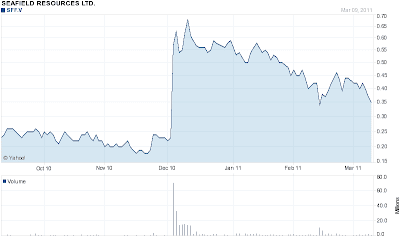 So the stock West screamed “accumulate to $1” in the December pumpo now trades at 33c. Funny dat, innit? DYODD.