What democracy means in Latin America

This is what it means. 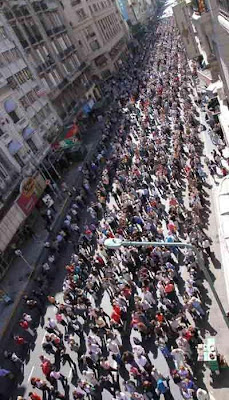 Click to enlarge
It’s getting difficult to estimate just how many people have lined up to pay their respects to Raúl Alfonsín today. I’ve seen 30,000 people mentioned, and heard 50,000 quoted on Radio Continental this evening. By midday tomorrow when his mortal remains are taken from Congress to their final resting place in the famous Recoleta cemetery, both those numbers will certainly be underestimates by some distance. Clarin reports:

“From midday, the queue strung out like a ribbon along the whole width of Callao Avenue. Every ten minutes, the rounds of applause and shouts “viva!” made the intervening silence be felt with greater intensity, in notable contrast to the habitual routine of hurried pedestrians and congested traffic.”

The obituaries for Raúl Alfonsín from the more lucid Argentine journalists and commentators have not ducked the imperfections of Alfonsín’s presidency. The writers gain credit for this, they do not lose it. However nobody in Argentina today doubts the enormous and positive legacy that Alfonsín gave his country and his continent. From Jorge Lanata in Critica:

“I heard yesterday, many times, that we owe our democracy to him. Alfonsín must be there in heaven smiling (and saying) “At last they’ve realized.”

The above photo is packed full of ordinary folk just like you and me. The humanity, mutual respect and plain goodness depicted is heartwarming. This is far more important than petty political bickerings, far more fundamental than the development and outcome of a financial recession, far more telling than anything that might happen at a conference in London tomorrow.

Alfonsín taught his lesson well and it has been remembered. Now the people of Argentina are passing his lesson on. Thank you, Raúl.