This was the main intro piece to this Sunday’s edition of the weekly. 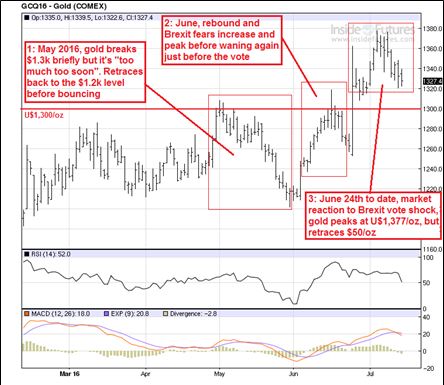 Away from the world of gold permabears, that group of shining individuals
that make even the prepper end of the goldbug world look intelligent, it would
be tough to find a comment saying that what we saw last week was The Top and
it’s all going to go wrong for gold from here. But a correction it was, gold
backed off from the U$1,400/oz level very easily and its action reminded me
strongly of May 2016 and the sentiment at the time. Use charts, money-flow
data, group psychology studies or whatever you prefer, but the general consensus
in gold back in May was that gold’s move to $1.3k was “too much too soon” and
the metal needed another good reason to go higher before it could. We saw it
get oversold back to U$1,200/oz as well (and I even remembered a few of those
gold bears trying to raise their squeaky voices again right down at the bottom)
but we rebounded from that level too. Then came the Brexit event, a two stage
affair with sentiment pre-Brexit that showed growing fear of a Leave vote,
which waned the week before the vote took place. Then the big whammy on June 23rd
and the result day of June 24th, which shot gold through the
U$1,300/oz level with a vengeance. Since then it’s stayed there but as we’ve
seen in the last few days, it’s also dropped from highs.
Okay, that’s the scenario to date. Now for a few statements mixed with a
few working theories to get us to a gold price forecast for the near future:
1) Gold is bullish, period. It will take a lot more than a retrace from
U$1,380/oz to change that, so the “It didn’t break U$1,400/oz we all gonna die”
brigade can stick their whining where the sun doesn’t shine. This is the single
most important point, I urge you not to lose sight of the forest for the trees
and therefore repeat: Gold is bullish, period.
2) The action in the last two months, from mid-May to today mid-July, has
been dominated by Brexit. The pre-vote sentiment that moved from one side to
the other and then back again, the big shock of a result the market wasn’t
expecting. And of course while we’re on the subject, count me in as I got my
call 100% wrong and was way too confident about a Remain result all the way
through the process (and being long the gold sector was one of my all-time best
“right for the wrong reasons” moments).
3) It’s therefore no coincidence to see gold drop from its highs in the
same week in which “Brexit Fear” (or maybe that’s “Brexit Fear!!!”) abated on a
worldwide level. There’s plenty of financial sector evidence for that away from
the gold market, just look at the S&P hitting new highs or the way the
British Pound has reverted its drop (people calling “parity with Euro!” less
than a week ago have STFU en masse). The world has vaccinated itself against
Brexit fallout, the EU isn’t facing a new series of referenda (no sitting government
leader will be as stupid as David Cameron was, they tend to value their jobs)
and now it’s only a major headache for one small island sitting off the coast
of continental Europe. Over in the UK the appointment of a new Prime Minister
and her big ministerial re-shuffle has brought in a pro-Brexit team to lead the
Brexit talks, but even the top man among them David Davis talks about 2018 as
the earliest date to trigger the Article 50 leaving clause and that’s from the
most aggressive end of the pro-Brexiters in the new government. People, two
years is an eternity in the financial markets, it’s hardly a shadow on the
horizon but even then, the way in which the new PM has played the Scotland card
(1) (quite brilliantly if you ask me) means even 2018 looks too close for any
formal Brexit negotiations to start with the EU. I could go on and on about
this so I won’t, the bottom line is that Brexit Fear has all-but disappeared
under the new reality of “two years minimum” (and it’s a fair bet Brexit will
never happen). 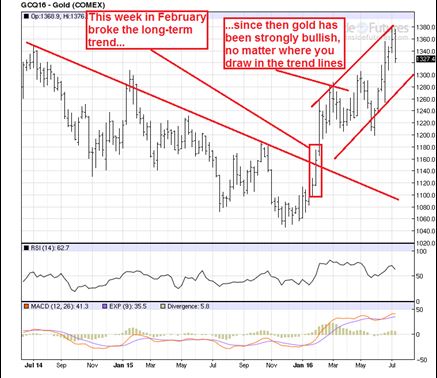 4) In a bull run in any issue, large or small, asset or equity, we’d want
to see exactly the type of pulse-retrace-pulse we’ve seen this year in gold.
Discount the trend-breaking moment in February (clear as a bell in hindsight)
and considering March to July 17th, the way the gold price has moved
has been obviously and clearly bullish, you couldn’t ask for more. Well, you
could if you’re one of those “Wheee To Da Moon Alice” people but here at The
IKN Weekly we prefer to hold on to our profits after making them.
5) The hot speculative money washing through gold that I mentioned in
last week’s opener showed itself again in no uncertain terms. Here’s an update
of the GLD bullion inventory chart of last week, Brexit-to-date, and look how
nearly 20 tonnes was taken off the top of holdings last week, 16 of them in one
shot. That’s not the type of action you get from people wanting to protect
their asset value with a long-term position in the world’s historic keystone
store of wealth.

In the great scheme of things, 20 tonnes of gold is neither here nor
there but in the short-term, particularly in the current strange days, it
matters.
Bottom line: Putting all those bits together, unless a new event comes along to
justify a new move in the price of gold we’re going to be stuck where we are
for a while and will probably see it move back to U$1,300/oz, too. And before
you say anything under your breath, sorry Turkey and its attempted coup this
weekend doesn’t count, we’ve already seen a dozen geopolitical events come and
go (Greece, Cyprus, Ukraine, Israel, ISIS, Syria etc etc), they all threaten to
destabilize EVERYTHING for a while and then they don’t. The reason Brexit has
been different (or if you like, affected gold for a couple of weeks rather than
a couple of days) is that it had (has?) a direct world-scale financial effect,
not just a political one. Summed up, Brexit shot gold higher because the world
was afraid of Brexit. Now the world isn’t afraid any more. What goes up comes
down, Hermes said so. On the other hand gold stocks have two modes of impetus, not
just one. The money now moving into the sector is more than enough to make for
a vibrant bullish market even if gold consolidates for a while, so I fully
expect the good times to keep rolling for the gold stocks even if the
underlying metal treads water a while. I own gold, I trade stocks. Two
different things.
That’s enough for one day but before we move on, please note the use of
the word “guess” in the title line of this intro piece. I’m under no illusions
and I’ve been wrong along the way in 2016 too, this may be another one of those
moments. I’ve had to keep questioning my attitude towards gold (market leader
it is) and the mining stocks. As an example see my bad Brexit Remain call above,
for another please recall the way I fixated on gold re-tracing back to
U$1,180/oz in March and lost a few good entry points on stocks as a result. I
finally got that out of my system in IKN361 dated April 10th (before
too much damage was done). Today’s piece can be summed up by “near term gold
sideways and stocks bullish” but it’s just another working theory, subject to
change and so forth.