What if you held a press conference and nobody came?

Here’s Jaime Pinto and friends, holding a press conference in Lima this morning. 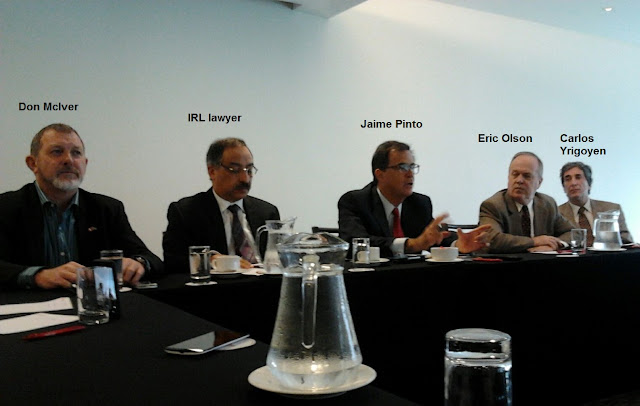 They’re running down the company’s eight point plan, recently released, that explains the company wants to turn its back on an agreed U$240m financing deal in a difficult market and dilute the company’s share count to merry hell. And the reason? “Because”.

These people are crazy! They want you to agree to refuse a cheque to fully fund your mine! In this market!

But what you can’t see in this is that he’s speaking to just four people. Well, five if you include the photographer.

Not going well, is it Jaime?

UPDATE: My fave Q&A so far:

Q: “Why haven’t you travelled to the Ollachea project?”
A: “For safety reasons.”

PS: To be fair, by the end of the one hour and twenty minute presser there were a total of 15 people in the room. The five sat at the desk, the contracted photographer, the presser organizer, and eight in the audience. El Comercio’s journalist was there, but Peru’s biz news media of choice Gestión didn’t bother to go. Neither did AP, EFE, not sure about Bloomie (edit update: Quigley of Bloomie was there). But what’s really telling is that the Reuters hack didn’t show, even though the Reuters office in Lima is literally across the road from the hotel where they held the bash. Reuters had better things to do, apparently.