What’s Chuck Higgins and his friends at Fasken reading today? 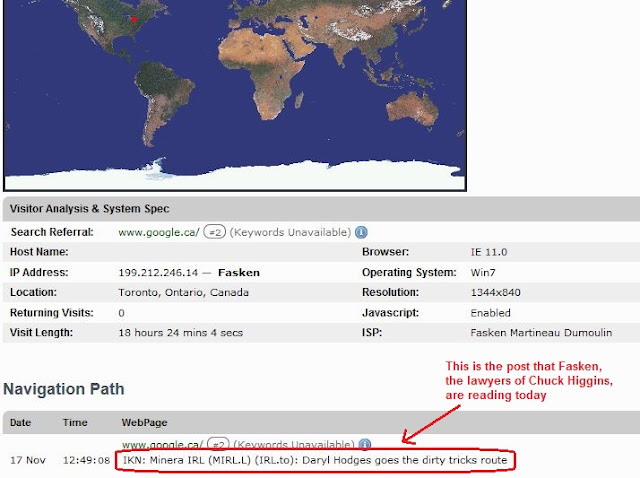 Here’s
an interesting development. Your humble scribe received a phone call
this afternoon from Diego Benavides concerning the next move we can
expect from the now ex-Exec Chair of Minera IRL (IRL.to) (MIRL.L), Daryl
Hodges.

Despite
being voted down by shareholders to the tune of 91%+ on Thursday
morning, this snake in the grass doesn’t seem to have got the message
yet and is still trying to get his grubby hands on the jewel that is
Ollachea. To that end, as from next week (says Diego Benavides, who’s a
man that’s definitely lost his slot on Hodges’s Christmas card list) we
can expect the Hodges crew to do a couple of things.

1)
Jaime Pinto, Hodges’ new lackey and front man on the board, will be
nominated to run the company. For the record, Pinto flew to Toronto this
Friday afternoon to meet with Hodges and his band of scum (maybe in The
Pilot bar…hey you never know right?). In this way they plan to
continue to control the company, but pretend it’s being headed up by a
Peruvian with everybody’s best interests at heart (which is a joke, all
they want to do is get all the baubles for themselves).

2)
Hodges and his stooges have decided to go the dirty tricks route by
coming out with a whole bunch of allegations against Diego Benavides, in
order to besmirch his good name and try to turn public opinion
(particularly that of the Ollachea community) against him. I asked
Benavides for details of the allegations and although he told me he
knows exactly what they’re going to charge him with he wouldn’t divulge
the information. However, he did make it 100% clear that everything
they’re going to accuse him of is absolutely false.

When the news hits next week, don’t say you weren’t warned.