While we’re in the mood to check up on zero-moral gold scammers and pump artists out there…….

….let’s check on how Porter Stansberry and his ridiculous pump of Nautilus Minerals (NUS.to) is doing.

“If you adhere to the view that it’s only correct for intelligant people to take money away from stupid people then today’s the day to short Nautilus Minerals (NUS.to). It’s also the day that Porter Scamsberry unleashed his proletariat on this woefully bad pump job (it’s up 10% at the bell…make that 15).”

So let’s see how NUS.to has done since then: 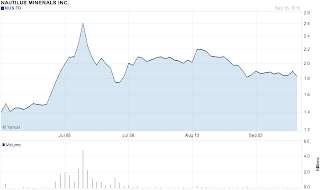 Feeling stupid yet, Porter? Probably not, cos you’re so pleased with yourself about ripping off thousands of sheep with your disgusting market tactics that you actually think you’re clever, ain’t that right you freakin’ scumbag moron?