Whither goest thou America in thy shiny car at night?

Let it be declared that IKN has some wonderful but wonderful readers. And one of them has the initial ‘R’ to his first name and took this photo (click on it for full size, it gets enormous) at a Jack Kerouac exhibition in New York mere hours ago. He then sent it to me, knowing as he does of my soft spot for Jack Kerouac along with his comment of “I was so taken by it when I read it again in original. Gave me goosebumps.” Mr. R, you totally rule. 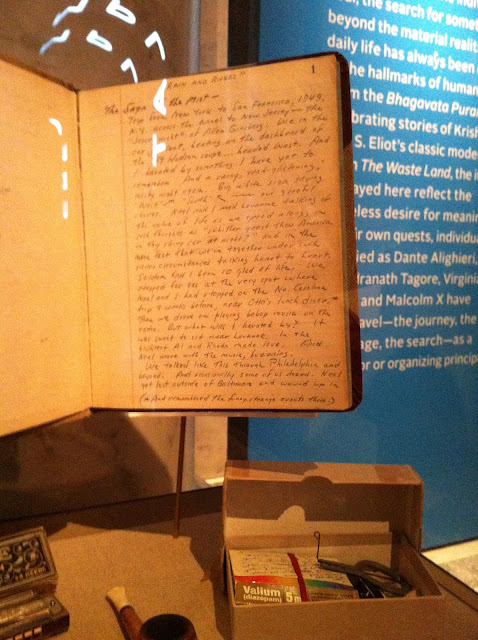 click to enlarge (gets very big)
What you’re looking at is a page of Kerouac’s original 1949 diary, the scribbles that formed much of the meat for On The Road, and that page contains a couple of all-time fave lines in “…haunted by something I have yet to remember…” and “Whither goest thou America in thy shiny car at night?”, as well as a reference to Otto’s lunch diner, of all places.
So labour of love that it is, here’s the page above copied out for easier reading. Enjoy:

“RAIN AND RIVERS”
The Saga of the Mist –
Trip from New York to San Francisco, 1949. N.Y across the tunnel to New Jersey – the “Jersey night” of Allen Ginsberg. We in the car jublilant, beating on the dashboard of the ’49 Hudson coupe…headed West. And I haunted by something I have yet to remember. And  a rainy, road-glistening, misty night again. Big white sign saying “West—> “South <—   our gleeful choices. Neal and I and Louanne talking of the value of life as we speed along, in such thoughts as “Whither goes thou America in thy shiny car at night?” and in the mere fact that we’re together under such rainy circumstances talking heart to heart. Seldom had I been so glad of life. We stopped for gas at the very spot where Neal and I had stopped on th No Carolina trip 3 weeks before, near Otto’s lunch diner.* Then we drove on playing bebop music on the radio. But what was I haunted by? It was sweet to sit near Louanne. In the backseat Al and Rhoda made love. And Neal drove with the music, huzzaing.
We talked like this through Philadelphia and beyond. And occasionally some of us dozed. Neal got lost outside of Baltimore and wound up in
(*And remembered the funny strange events there.)