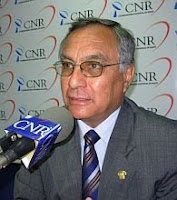 Tomas knows absolutely nothing.
We’ve had the misfortune of mentioning twice on this blog the social trainwreck known as the Winchumayo mine in the Itaupa region of Puno, Peru. Today comes episode three of the saga.

If one day you find yourself in a jeweller’s shop in Peru buying gold, have a think about what kind of people you’re supporting with your potential purchase. The whole episode is still shrouded in some mystery, with obfuscation aggregated by an idiot of an Interior Minister (APRA party surprise surprise) Octavio Salazar who acted too hasily on erroneous police information and declared to the country that there had been no deaths whatsoever and only five injured, which is clearly untrue according to multiple local reports and hospital stats. What’s certainly true is that there was a meeting of locals and then an organized band of hoods moved in with firearms and blades to add their point of view to the discussions taking place.

The question, as always, is ‘cui bono?’ and the answer comes in Latin, too; status quo.

Meanwhile, the scumball Cenzano is trying his hardest to wash his hands. This morning he stated to local newspaper Los Andes that “I no longer have anything to do with the mine, I have already transferred everything”, which translated into LatAm realspeak likely means “I’ve signed all my ownership rights to this social, environmental and political deathtrap to some friend or other until this all blows over and then he’ll sign it all back to me later”.