As promised last week and delivered in IKN73 last Sunday, here’s that OTC short idea we were talking about. Read on and see what you think for yourself.
Note to subscribers: Somehow I had a nasty bout of keyboard dyslexia (not the first time, as you know) and named the ticker on Worldvest/Iron Mining Group as “WVOT.ob” on Sunday. This is worng and the correct ticker (also corrected below) is “WOVT.ob”. My thanks to several of you who pointed out my crass error. Anyway, enjoy.
Worldvest (WOVT.ob): An OTC short
As promised on the blog this week (10) here comes the obvious shorting opportunity. Worldvest (WOVT.ob) is the name and up to now it’s been some sort of corporate global merchant banking and investment vehicle type of set-up. But now WVOT has decided to morph itself into an iron ore producer. In its September 22nd news release (11) WVOT, soon to change its name to ‘Iron Mining Group’ and with a website of the same name (12), announced it had signed a letter of intent (LOI) to purchase an iron sands property in Chile. Now that’s fair enough and any public company that decides to morph itself into a potentially lucrative business opportunity shouldn’t be dismissed out of hand, but when you start looking a little bit behind the curtain there are plenty of strange things here.
Firstly, what Iron Mining / Worldvest is promoting is a company that will go into production of iron ore at this asset in the first quarter of 2011 and start exporting the product to its affiliate company in China which already has an order book to fill. This is strange, because for one thing WOVT has done nothing but sign a letter of intent on the property in question. For another thing, the property is one of those ‘iron sands’ projects that nobody (so far at least) has put into production. And if junior miners with experienced mining personnel, geologists and metallurgists haven’t managed that, what chance does a company with just two people on its board of directors (13) have to bring an iron sands play online in less than six months?
Third up there’s the asset itself. One red flag comes up on the company website when it’s mineral content is referred to as “a reserve” when it’s extremely unlikely to be truly classed as such at this point (IKN readers tend to know their 43-101 rules and regs, so there’s no extra comment needed there). Then there’s the mention of “innovative technology” to mine these sands, always a big red flag phrase when it comes to OTC companies in general and mining companies in particular. If the gist of the WOVT promotion is to be believed, all they need to do is dig a trench in the sands, let the incoming sea tide fill it with iron rich mineral, then scoop it all out of the trench and ship it off to China to receive their payment cheques, lather rinse repeat. Now that may be technically true, but it’s also technically true that Lady Gaga could be the President of the USA come 2013.
No mention of methods of processing the sands. No mention of building infrastructure. No mention of how WOVT intends to pay for the property or the upfront capex that would be needed apart from a LOI with an unnamed financial entity that states WOVT is looking to raise $50m in debt financing. No details on the website or in its filed documents of resource grade, recovery percentages, absolute size (apart from a couple of basic length and width numbers) or how WOVT gets to payable iron ore. It’s all rather strange and then gets stranger still when the background of the company Executive Chairman, interim CEO and largest shareholder, Garrett K. Krause, is checked out. Krause knows his way around the US bankruptcy courts and clearly (as attested by this case (14)) knows how to play the bankruptcy system to his advantage (and the detriment of others), suggesting deep experience. He also received a seven year ban in the 1990’s from the Alberta Securities Commission (15) for some pretty flagrant rulebreaking back then. But this was never revealed in the filings for his subsequent moves into the US OTC and Nasdaq bulletin board markets because there was no legal requirement to disclose such stuff under OTC/BB laws (just another reason why this author is allergic to OTC stocks).
But, as always with your author, the real clincher in calling WOVT.ob a short today are the company financials (16). After a long period of inactivity and a share price drop in June and July this year, WOVT.ob has woken up on the back of its new promo campaign and climbed back to a $2+ level ($2.09 as at Friday’s close) on rather bitty and suspect volume exchanges. 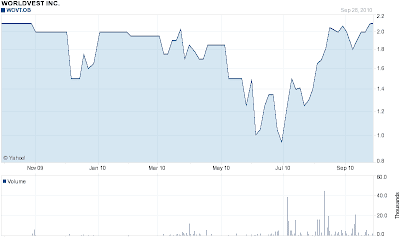 As at June 30th 2010, some of the main financial criteria of WOVT as a company were:
Cash at bank: $6,859
Total current assets: $355,015
Current liabilities: $2,291,480
Working Capital: Negative:$1,936,465
Since that time no new financing arrangements have been filed, either.
As for shares outstanding, they stood at 59.07m as at June 30th, but according to the LOI agreement to buy the Chilean assets (from a Chilean private company called CIM) the deal involves paying a touch over 20m shares to the vendors, therefore if we assume the deal goes through the current status is close to 80m shares out.
Shares outstanding: 80m
Price per share: $2.09
Market Capitalization: $167m
Or in other words, a company with basically zero cash and a negative working capital of $1.9m that, according to its own business plan (written by someone with a track record of company-related strangeness in Canada and the USA who receives a $120,000 salary for 2010) will try to raise $50m in debt to launch a iron sands operation in Chile that will be producing in 2011 is worth U$167m.
It’s a short. Ok?
Disclosure: No position in WOVT. This note is not one I will personally act upon either and do not plan on taking a position in WOVT. This section that goes through the case for shorting this company is for those subscribers who have asked me for shorting ideas and I much prefer personally to concentrate my portfolio on the long side. DYODD etc.