Yamana Gold (AUY) (YRI.to) hasn’t been telling the truth about its massive legal problems in Argentina

Who remembers back to the court case between Yamana (AUY) (YRI.to) and Ricardo Auriemma over fees that Señor Auriemma said were due to him from dealing he had with Northern Orion (which was bought out by YRI)? Not many of you I’d expect, because Peter Marrone would prefer you didn’t have it on your mind when it comes to his company. But you may remember this March 2015 NR in which YRI said that the case had been ruled in favour of the company and against Auriemma:


TORONTO, ONTARIO–(Marketwired – March 3, 2015) – YAMANA GOLD INC. (TSX:YRI)(NYSE:AUY) (“Yamana” or “the Company”) today announced that the Commercial Court of Argentina has annulled the previously announced award granted to
Ricardo Auriemma
(“Auriemma”) in the litigation between Auriemma and 0805346 B.C. Ltd., a subsidiary of the Company which was formally known as Northern Orion Resources Inc. The effect of the annulment is that the previously announced award is cancelled and has no further effect.

The annulment vindicates the Company’s consistently maintained view that the award has no valid basis and is without merit.

That sounds all done and dusted, right?
Wrong
It takes a bit of snuffling around the Argentine judiciary website, but hit the right buttons and put in the right keywords* and you get to the Yamana vs Auriemma case page. And there you see this:

Now that’s interesting! For a case which was supposedly over (according to the smooth corporate image-makers at YRI at least), there has been a lot of activity in September. For example, this extract from one of the docs which is in Spanish of course, but you see the names and the date stamp: 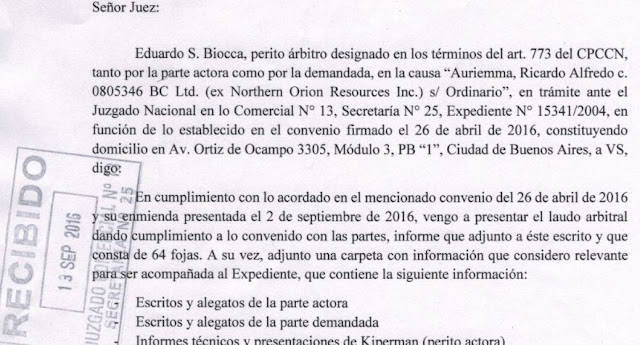 So why is this decent fodder for an IKN blog post, you ask? Well dear reader, if you start reading the recent rulings and depositions (as I’ve been doing this morning) you soon see that far from this case being closed, it’s recently gone against Yamana and they’re now on the hook for a sum as high as U$110m. In fact the decision favouring Auriemma is now a done deal, all the lawyers are doing now is haggling over the amount that YRI will have to pay him, because one side wants to use Pesos, the other side dollars, one side no accrued interest the other side yes, etc etc.
So let’s see now: Agua Rica’s a bust, Suyai will never happen and now Alumbrera is going to cost the company multi-millions. Peter Marrone really REALLY screwed up by walking into Argentina like a greenhorn.

*mail me if you’re interested in getting to the exact spot, instructions can be provided.