You must remember this, a kiss is just a kiss…. 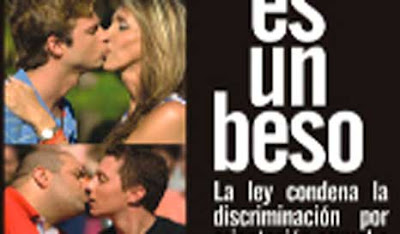 “A kiss is a kiss”; a still from the TV slot
In Uruguay, the gay, lesbian, transsexual and bi association named ‘Ovejas Negras’ (black sheep) has put together a TV campaign to combat discrimination. It was funded in part by the the Embassy of The Netherlands and the hook line is a hetero couple kissing and a gay couple doing same activity, with the slogan “A kiss is a kiss”. According to the organizers, the whole idea was to make people aware of anti-discrimination laws in Uruguay that have existed for several years.

Two of the three major TV channels in Uruguay have refused to run the campaign. Apparently either kissing is an offensive activity, or there are no homosexuals where they live. Or both.

File this post in the “understanding South America” box.